What’s with PMS and Food Cravings? 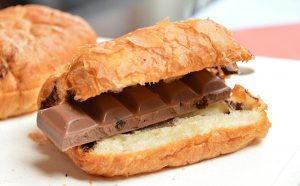 You know how it is. You’re sitting in a lecture hall minding your own business and listening intently until suddenly you get a craving for chocolate so intense it takes every bit of your will power not to dash out and head to the cafeteria, right there and then. It’s food cravings – and the most likely culprit? PMS!

PMS, otherwise known as premenstrual syndrome, refers to the time right before you start menstruating every month – usually 1 – 2 weeks before your period begins. It’s estimated that as many as 90% of all menstruating women get at least some symptoms of PMS each month.

PMS symptoms include uncomfortable bloating, mood swings, fatigue, irritability and, of course, the dreaded, gotta-have-it-NOW food cravings. Most researchers agree that the cause of PMS is likely to be hormonal fluctuations and how these fluctuations affect the chemical messengers in the brain known as neurotransmitters.

Why Does PMS Cause Food Cravings?

Did you know that the most common PMS-related food cravings are for sweets and carbs? The truth is that we don’t really know what causes them, although a few interesting theories are floating about.

Some experts, for instance, believe that because PMS may cause a dip in one’s mood, women are turning to food to make up for this – ultimately using it as a pharmacological therapy to boost their serotonin levels. Serotonin is the neurotransmitter in the central nervous system, which is responsible for creating a general sense of well-being.

Another theory is that women simply rely on food for comfort during a time when they are likely to be feeling slightly down in the dumps, bloated and unattractive.

From a hormonal perspective, studies have also shown that women tend to eat more when oestrogen levels are low, and progesterone levels are high – as is the case when PMS takes place during a woman’s cycle.

At the end of the day, does it really matter why you want (or NEED) that chocolate? You bleed from your uterus like a gutted fish every single month and yet carry on with your life as though nothing is even happening like a WARRIOR! So, go get it, girl! You bloody deserve it.