Virtual Conversations: The Rules of the Road 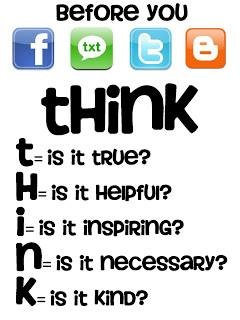 So much of our interaction happens virtually these days that there is a whole new term for how to do it: netiquette. Netiquette lays down guidelines for how to behave when communicating electronically, whether via email or social media of any kind. It’s usually enforced by fellow users and it’s worth knowing what’s involved if you want to avoid a virtual slap on the wrist!

Here are some basic guidelines:

Identify yourself
Use your name to sign on and/or a signature at the bottom of your message. People like to know who they’re talking to and are more likely to respond if they know who you are.

Use a descriptive subject line
Summarise what you’re saying in a short and descriptive phrase so people can easily decide whether they want to read it and quickly find it again later if need be. Then stick to your subject – don’t wander off topic.

Respect the opinions of others, even if you don’t agree with them
Make your point firmly but nicely. Avoid name-calling, sarcasm and writing things you wouldn’t like someone to say to you. ‘Flaming’ people (insulting them online) will only cause others to lose respect for you and your opinions.

Don’t shout
Things written all in caps are difficult to read and can come across as rude.

Respect copyright laws and the privacy of others
It’s considered stealing to copy and re-use someone else’s work without giving them credit. It’s best to ask their permission first, but at the very least make sure you cite your source and link to the original (assuming it’s online). If it’s a personal email, you definitely need permission to share it first.

Double-check what you’ve written (and who you’re sending it to)
Especially if you are writing something you feel particularly strongly about, it’s often worth drafting it and then re-reading it later, from a fresh perspective and with an eye out for typos and the tone of your message, before sending it.