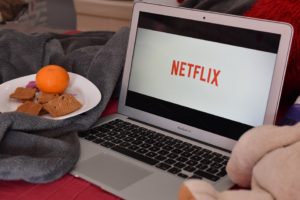 Netflix and Chill’? Most def! Especially with the awesome shows lined up to hit our screens over the course of the next few months. Here are the ones that have us the most excited.

This is a brand new anime series which follows a boy who learns he is connected to a line of heroes meant to fight alien invaders. Intense stuff! Premiered on April 1st.

Who doesn’t love a good Netflix doccie? Well, Our Planet is definitely going to be one of the most popular of 2019. It’s a new eight-part series narrated by Mr David Attenborough himself, and it’s all that you need to know about our incredible planet earth. Catch it from the 5th of April. Bring popcorn.

She’s Gotta Have It

Season 2 of Spike Lee’s hit show (based on his 1986 movie) is set to be released on the 24th of May. Be sure to catch the talented DeWanda Wise doing what she does best.

The kids are back with a bang in Netflix’s most popular and most charming sci-fi series to date. Season 3 of Stranger Things arrives on the 4th of July.

This is undoubtedly one of the most talked-about Netflix shows of all time, and binge-watchers will be thrilled to learn that season 3 is set to be released in 2019… only, we don’t know exactly when just yet. Watch this space!

Netflix or DStv – That is the Question…

From a cost-perspective, the answer is quite straightforward. Netflix. You can sign up for as little as R99 a month and your first month will be completely free. However, you’ll also need to keep in mind that Netflix is a streaming service, so it’ll cost you extra in data on top of your monthly subscription fee (which you can cancel at any time). Uncapped internet is recommended for a full experience.

DStv has also recently introduced a few low-cost plans that students might be interested in, such as local-oriented DStv EasyView (R29 per month) and DStv Access (R99 per month) which provides access to 64 different channels. However, it’s important to consider related installation costs.

Are you a Netflix or DStv subscriber? Tell us why or why not on our Facebook page!