Up Your Ball Skills with the #FafChallenge 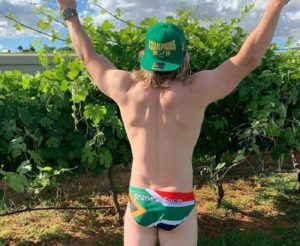 There is no denying that South Africa has gone nuts about rugby of late. The love that our country has as a whole for a champion rugby team has known no bounds. It was only amplified recently when resident comedian of the team, Faf de Klerk, decided to don a Speedo embossed with the SA flag shortly after the team’s win at the world cup.

Along with eliciting a few belly laughs from the nation, the Speedo and Faf’s famous pose have also brought about a new movement: a ballsy challenge called the #FafChallenge which is sure to benefit men everywhere. Here’s how you can get involved.

The #Fafchallenge is all about raising awareness around testicular cancer and how it can be cured if it is detected early. Obviously, the only way that this is possible is for men to get comfortable checking their balls on a regular basis. The #FafChallenge is based on boosting your ‘ball skills’ and learning how to check them the right way.

As per the official website of the #FafChallenge, you should conduct the self-exam as follows:

1. The warm-up: The best time to check is after a warm bath or shower.
2. Touch down: Carefully feel each ball, searching for abnormalities or changes. Check for any swelling, unusual lumps, discomfort or pain. Check both.
3. Blitz defence: If you notice anything unusual, consult with your doctor. If diagnosed early, testicular cancer can be treated.

According to the national cancer registry of 2014, the lifetime risk for testicular cancer in South African men is 1 in 1 798. It is most common in young men in their late 20s and early 30s, with an average age of diagnosis of 33 years old. In fact, testicular cancer is the most common type of cancer among men aged between 20 and 40 years old. However, it can strike at any time and is also surprisingly common in children and teenage boys.

So, don’t drop the ball when it comes to your balls. It could mean the difference between life and death!