Too young to protest? 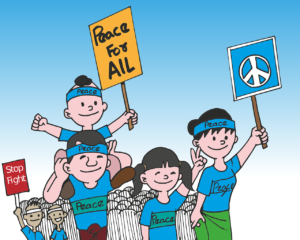 All over the globe, there’s a not so quiet revolution. People – and increasingly young adults and teens – are taking to the streets to stand up for their rights. From gun violence in the USA, to LGBTQ rights, to gender-based violence right here in South Africa, there are many issues that are mobilising citizens to take action.

In the past few years, Greta Thunberg’s radical stance against climate change has shown us all that young people do have a voice, and that they must be heard. At just 15, she began her protest and raised a huge amount of awareness (and sparked a lot of controversy) for her cause.

But how young is too young? Can you be too young to protest?

This statement, of course, should be taken with a pinch of salt. Small children, for example, should not be exposed to violent protest action. And when it comes to young activists, personal safety should always be a priority.

However, it’s important that children and teens are raised to understand all of the issues that surround different protest causes. Young people who value their own human rights and the rights of others tend to mature into adults with a more comprehensive and compassionate view of the world that they live in.

Young activists should understand WHY they are protesting

You’re not too young to protest if you really understand the issues at hand if they have a genuine effect on your life, and if they make you ‘mad’ enough to want to take action. For example, many young women are (or could possibly be) affected by gender-based violence. Men are also often welcomed as allies at these protests.

Don’t protest just because everyone else is doing it

Many people simply ‘jump on the bandwagon’ when it comes to protesting. This is really quite shallow. You should join a protest action because you feel strongly about it, not just because your friends are taking part.

Being an activist can be frustrating, as there often aren’t any direct results.

For example, there have been many ‘Black Lives Matter’ protests all around the world in the past few years, but change is very slow to take place. Don’t be discouraged. The point of most protests and marches is to create awareness and encourage more people to ‘wake up’ to the world’s problems, so that slowly but surely change can be effected.

Be aware of the consequences of protesting

Sometimes, getting involved in activism has consequences. If you want to be involved in a peaceful march, it’s unlikely that anything bad will happen. However, when tensions are boiling over and people are angry, even peaceful protests can turn violent.

Sometimes police are stationed at protests as a precautionary measure. Being aware of the consequences allows you to make an informed decision about how involved you want to be.

Activism is a choice. And if you are affected by an issue, you’re never too young to protest.