The Art of Responding 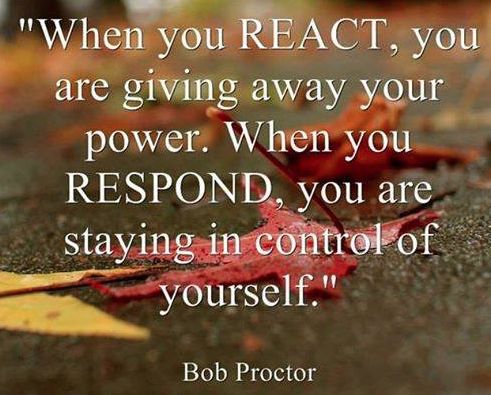 Many people think that responding and reacting are the same thing. In fact there’s a world of difference.

When we react to something, we tend to jump right in, often from an emotional place. If we’re lucky, this might not make a difference, but more often than not, it only makes things worse. Responding to something is a far more considered action, and it tends to be more constructive too.

Here’s how to do it:

Let’s imagine that something dramatic has happened and that there are others involved. You or someone else may even have said or done something shocking. You may well have an emotional reaction to it, but before you blurt out the first thing that you’re feeling or thinking, stop and take a deep breath.

If you need to give yourself a little extra time, count to ten in your head.

You may well be thinking something like, “Oh my gosh, what does this mean for me/the other person?” Rather than saying it, imagine that you are stepping back a little from the situation. You can even physically do this if it helps.

Stepping back gives you an opportunity to see things from a slightly different and hopefully more holistic and realistic perspective.

Identify the truth (as far as you can)

Ask the question, “What’s actually going on here?” and see what pops into your mind. You may be surprised at the answer, which could be anything from “It’s really not that bad” to “I/They said or did that to get attention”, to “OK, this really is serious because…”.

Rather than reacting to what’s going on at the surface, think about what the most constructive response to the underlying truth might be. How can you help improve the situation, rather than make it worse? Then do that.

This may sound like a really long process, but in fact once put into practice it all happens in a matter of seconds as the mind subconsciously processes the different stages.

As a starting point, think about situations you’ve already been in and how you might have responded differently if you’d thought about it. Start applying this new skill now in small ways, so you’ll be able to deal calmly with bigger ones when they come along. With a little practice, you’ll soon become the kind of person everyone can rely on to keep things on an even keel, no matter what’s happening.