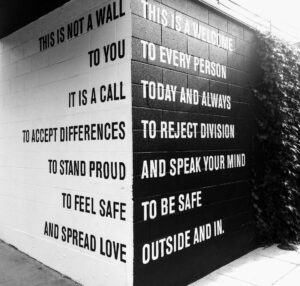 The issue of talking tolerance is extremely relevant in South Africa, particularly when one looks at the history of our country. The reality is that, despite making immense progress in this regard over the last 26 years, prejudice, discrimination, and intolerance remain a problem amongst South Africans from all backgrounds and ages – and it isn’t only to do with race. There is prejudice against women, the LGBTQ community, persons living with disabilities, and more.

Surprisingly, prejudice is particularly widespread within the teen demographic. The question is, why? What are some of the most common problems associated with prejudice during these crucial years, and how can we overcome them? Read on to find out.

There is a lot of pressure on teens to find their own identity but to still ‘fit in’ somehow. Because of this, young adults are highly aware of social status and avoiding the pitfalls of becoming ‘the other’, or the kid who stands out for the ‘wrong’ reasons. The key here for parents is to teach their teen the value of being different, as well as how important it is to stick up for those who might not fit into the mould and who are subjected to bullying and cruelty as a result.

Learning new things about yourself can be empowering, but it can also be terrifying, especially if you happen to discover that what you like isn’t necessarily what is considered ‘cool’ or what is expected of you. It is vital for parents to allow their teens the freedom to explore and embrace whatever it is that they gravitate towards.

Discriminating against your son who isn’t keen on playing soccer and would rather learn to play the guitar isn’t setting a good example. Teens learn from their parents how to treat others and how to accept their own differences.

A desire to be liked

Everyone knows the exhilarating feeling of being liked, and of being accepted. It is no wonder teens crave this to such an extent. After spending a few years navigating through adulthood, you quickly learn that being liked is a lot less important than you originally thought and that it is much more important to feel confident to just be yourself. However, this life lesson is learnt through experience.

Once again, parents should strive to set good examples in this regard, taking every opportunity to unashamedly flaunt their strengths, likes, and individualism without worrying what others may think. Teens are always taking note!

Ultimately, parents can teach their kids to be more tolerant by constantly having conversations around issues of difference and encouraging them to be more open-minded and accepting – not just of others, but of themselves. Modelling the message is also vital, as is broadening the opportunities for your teen to associate with people who they might not ordinarily have had the chance to meet or connect with. Finally, do your best to encourage activism and to support your teen in getting involved in causes that they care about.

Tolerance starts at home. As a parent, you can make a significant contribution to the tolerance levels and self-love of the country’s next generation!