Student Article: Defending self to kick some ass 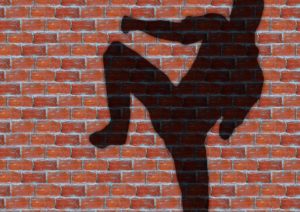 You’ve probably watched enough TV to ponder surviving a zombie apocalypse, a prison riot or a terrorist attack. But how do you think you’ll actually cope in a realistic, life-threatening situation? Probably not as well as you could! That’s alright. Most people are pretty clueless when it comes to self-defence, but luckily you can learn and practice these skills.

More good news is that fighting for your life as zombies take over the world is a highly unlikely scenario. However, in South Africa muggings and hijackings happen every day. That’s why it’s an excellent idea to take a self-defence class to learn how to protect yourself, your loved ones and your belongings from harm.

Defending self through martial arts

There are many different forms of self-defence training, from kickboxing to undergoing training in a ‘pure’ martial art such as karate. All of them will help you learn how to defend yourself while having the additional benefit of increasing your overall fitness and stamina.

Some of the popular martial arts classes you can take are:

This is a high impact sport that focuses on learning both defence and attack. Because it is so intense, kickboxing is incredibly useful for getting fit. You use your hands, knees, feet and head to protect yourself and learn to launch yourself at any would-be attacker, at lightning speed.

Karate is probably the most well-known of all the martial arts. It originated in Japan and is steeped in tradition and philosophy. Karate is an excellent form of defence. In fact, defence is the primary focus of Karate, teaching choreographed moves that prevent harmful attacks.

This is a form of Jiu-Jitsu that developed in Brazil in the early 1900s. It has much in common with Japanese martial arts; however, it has evolved to include typical street fighting moves where both opponents are locked together on the ground. What makes Brazillian Jiu-Jitsu exceptionally good for self-defence, is that a smaller and weaker person can successfully defend themselves against someone stronger by using the proper technique.

Krav Maga is an Israeli street fighting martial art. It is fast moving and efficient, teaching how to attack and defend at the same time. Krav Maga incorporates moves from many disciplines including boxing, Karate, wrestling and Brazilian Jiu-Jitsu.

There are many gyms and studios where you can take martial arts and self-defence classes in Braamfontein. These are just a few:

Are you all geared up to acquire some self-defence? There are so many benefits to learning a martial art.

The psychological knowledge that you can defend yourself in an emergency is extremely confidence boosting. Self-defence classes also build up your strength and fitness. Many people find that they enjoy the classes so much that taking part becomes part of their lifestyle and not just a skill to be learned.

So go out and kick some ass!