Social Media and Mental Health – how it impacts your teen 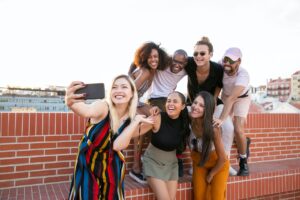 According to a report released by Common Sense Media, teenagers spend around 7 hours a day on their smartphones. Much of this time involves scrolling through and posting on social media and mental health is undoubtedly negatively affected. This statistic is staggering and will leave parents wondering what kind of effect this amount of screen time is having on their kids. Well, research shows that it has a tremendous impact on teenagers’ brains, particularly from a mental health and body image perspective. Here’s what you know.

Peer pressure and peer influence is alive and well

In a study conducted by researchers at the University of California in the United States, a group of teens were shown a selection of images on social media apps, like Facebook and Instagram. They viewed these images while undergoing an MRI scan. The study found that most teens were more likely to ‘like’ an image if they noted that their peers had liked it too.

The brain’s reward circuitry is activated when a human looks at an image of a person who they love.  The same study revealed that a similar thing happened inside a teen’s brain when something that they posted on social media received a high number of likes, shares, or comments. There are some experts who believe that this feeling can become addictive for teens, leading them to post more frequently and spend increasing amounts of time on social media.

Another study, this time conducted in Australia, uncovered a link between social media use and an increase in depression and anxiety in teenagers. It found that even those teens who spent as little as 30 minutes scrolling through social media feeds each day were likely to have increased of depression, anxiety, and loneliness.

This could be because teens are constantly exposed to images and videos of others who seem to be leading the perfect lives and looking their best. What teens do not realise, however, is that most people only ever posed idealised versions of themselves (thanks to image filters) and their lifestyles. Very few will post about the harsher realities that they are experiencing, leading teens to feel alone and depressed if their lives are not as perfect as the lives that others are portraying.

These young adults are also exposed to images of their peers with seemingly perfect complexions, smiles, and bodies – often forgetting how unrealistic these images really are. From filters to Photoshop, very few of these photos portray how a person looks in real life. Nevertheless, vulnerable teens will compare themselves to these images, often developing body image problems as a result.

What parents can do

As much as parents might feel a need to dictate their ‘late’ teens’ social media usage, this approach proves futile in an age where we are all constantly surrounded by technology. Instead, the key is to remind your teen of how unrealistic these platforms can be in terms of their content and how far removed these portrayals are from real life. It is also important to gently guide your teen to use social media as a tool for positivity rather than one for validation or comparison.

If you believe that your young student is being negatively impacted by their use of social media, seek out the right support, in the form of a counsellor or psychologist, immediately.