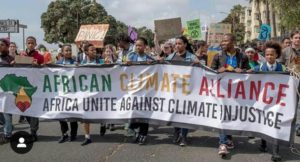 By now, you probably know all about the importance of ‘doing your bit‘ for the environment and taking steps to reduce your carbon footprint. But just how seriously are you taking this responsibility? Climate change activist, Ayakha Melithafa, is on a mission to emphasise the problems presented by climate change and what regular individuals can do in order to really make a difference. Last month, she attended the World Economic Forum discussions in Davos, representing South Africa alongside eight other young activists, including Time’s Person of the Year 2019, Sweden’s Greta Thunberg.

The most amazing detail of all? Ayakha is just 17 years old!

According to her mother, Nokulunga Sophazi-Melithafa, Ayakha has been passionate about spreading awareness about climate change and global warming within her rural community since she was in primary school. “Climate change affects everyone. It’s not just one person or one country, it’s a global problem that affects the poorest the most. In our community, people used to say, ‘What’s this thing your daughter is talking about?’ Now they’re changing the question and asking, ‘What can we do to be part of reversing this whole situation?’. It’s really amazing,” she commented proudly.

Ayakha strives to educate poorer communities about the dangers of climate change, especially considering how it is these poor communities that are the worst affected.

“My daughter is not talking about theory, she is talking about what she has seen. My farming neighbours, who are well-off, have systems in place to curb the drought. But we depend entirely on the rain and if it doesn’t rain, we really struggle. The poor and marginalised are the first to be hit by the results of climate change,” her mother added.

Ayakha and her mom travelled to Davos at the end of January 2019, with their flights and accommodation having been paid for in full by the WEF. We hope that her impact at WEF continues to have a ripple effect back home in South Africa where the effects of drought have been painfully evident over the last few years.

According to Natalie Geyser, a climate justice activist and communications specialist at Project 90, “She hopes to inspire social and climate activism in her community back home, put pressure on big emitters to stop blocking global climate action, exert pressure on South Africa to reduce its own emissions, and encourage South African leaders and policymakers to lead Africa into pushing the world towards ambitious climate action.”