Hot on the Small Screen 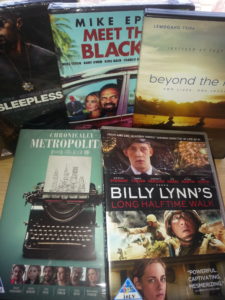 Take advantage of the last cold fronts as winter rolls to an end by snuggling up on the couch to watch the latest Ster-Kinekor DVD releases.

The South African film that everyone has been raving about has finally being released on DVD. BEYOND THE RIVER is about a poor boy from rural Soweto who finds new meaning to life through Canoeing. Together he and his unlikely canoeing partner overcome personal differences and challenges to form a strong bond and tackle the legendary Dusi canoe race. You will be moved and inspired by this exciting drama about friendship and perseverance.

Jamie Foxx gets down and dirty in the action-crime-thriller, SLEEPLESS, about a tough cop whose son is kidnapped because of his connection to the criminal underworld. It’s a thrilling race against time as Foxx’s character scours the nightclub scene in search of his son.

For a good laugh watch the satirical comedy, which takes a hilariously over-the-top look at black vs white in the suburbs in MEET THE BLACKS. When the Black family moves from Chicago in the hopes of a better life in Beverly Hills, it turns out they couldn’t have picked a worse time to do it as they arrive during the annual purge, when all crime is legal for 12 hours.

The fabulous and funny CHRONICALLY METROPOLITAN tells the story of first-time novelist Fenton Dillane, who returns to New York City unannounced and ready to reclaim his lost love, Jessie. Unbeknownst to him, she is engaged to be married and so Fenton enlists his head strong sister, Layla and his drug-dealing best friend to win her back. His actions set in motion a chain of events that affect the lives of everyone around him for better and for worse.

Award-winning director Ang Lee (The Life of Pi) brings the dramatic best-selling war story BILLY LYNN’S LONG HALFTIME WALK to celluloid. The film is told from the point of view of 19-year-old private Billy Lynn who, along with his fellow soldiers in Bravo Squad, becomes a hero after a harrowing Iraq battle and is brought home temporarily for a victory tour. Through flashbacks, culminating at the spectacular halftime show of the Thanksgiving Day football game, the film reveals what really happened to the squad – contrasting the realities of the war against America’s perceptions.

Are you a collector of DVDs? You can add to your collection by entering the Ster-Kinekor DVD Giveaway.