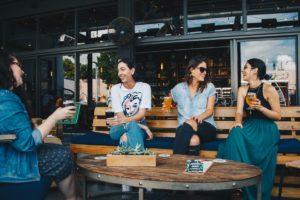 Alcohol – that magic tonic that relaxes you after a stressful day, lowers your inhibitions and gives you a bit of a confidence boost if you’re feeling shy or withdrawn. Drinking is a socially acceptable way of letting your hair down on weekends and special occasions. Just about everyone drinks – men and women.

For years, it was mainly men that were targeted by alcohol companies in their marketing. Now, however, young women are being targeted more than ever – and you need to be aware!

Alcohol abuse among women is on the rise and becoming a real problem, internationally and in South Africa. And alcohol ads that target women are part of the problem.

A recent UCT study among young women in Tshwane and the Western Cape found that alcoholism and binge drinking is increasing in the female population and the main culprits are ease of access to alcohol, and advertising that targets women.

Alcohol is also the root cause of many other social problems, such as domestic abuse, unplanned pregnancy, and if drinking continues during pregnancy, severe birth defects. South Africa has the highest rate of foetal alcohol syndrome in the world.

Marketing is subtle, and you’re not immune

You may think that as a college student, you’re too smart to be fooled by advertising. This isn’t the 1950s after all, where advertisers could make outrageous claims that no one questioned. But yes, alcohol companies do entice you to pick their brand over countless others by promoting and advertising their product – and they’ve become good at it.

Targeted social media campaigns can track the behaviour of you and your friends and make sure you see adverts as you’re scrolling through Facebook. Ever noticed that you see more alcohol-related ads after you’ve been tagged in pics from that big party? Social media advertising is very sneaky and smart.

Then there are sponsored events and promotions in clubs and bars that draw even more attention to the brand, placing it within reach and making access even easier.

How is alcohol marketed to women?

Alcohol advertising used to target mainly men – having a beer at a braai, doing ‘manly’ stuff, expensive whisky for the discerning businessman etc. But times are a changing. Women are largely achieving similar social status to men, and have similar goals, aspirations and pressures.

Women are targeted with alcohol brands that offer low calorie ‘slim and fit’ variants, that produce different exotic or organic flavours, and that reflect a sense of ‘girl power’ bonding with their friends. All of this is against a backdrop where drinking excessively and for all the wrong reasons is becoming increasingly normalised.

A culture that encourages women to drink

We’ve all seen the “I need a hug, a box of chocolates, and a bottle of tequila” meme on Instagram – or variations of it. This is just one example of how our modern culture has tapped into female emotions to make alcohol the answer to stress.

The joke used to be that women craved chocolate. Now it’s champagne. In a pretty glass. With bubbles, roses and the Valencia filter.

Over the past few years, so many alcohol brands – especially beer and cider – have developed low-calorie variants of their drinks. These are mainly targeted at women, who are seen as more health and body-conscious than men. Even the bottles are slimmer and more stylish to appeal to women.

You don’t have to order a cocktail to enjoy alcohol with a fruity, flowery taste. Think of how many craft gin and beer companies have sprung up in recent years, offering alcohol imbued with berries, flowers and other subtle flavours. Organically produced alcohol has also become popular. While not exclusively female, these ‘natural’ brands are extremely appealing to the female market.

“Empowered women empower women” – the concept of girl power, and women sticking together is definitely a thing in the late 2010s. And what better way to celebrate than with a glass of bubbly pink champagne? Or a handcrafted fynbos and rosemary gin and tonic? Or a few rounds of low carb, low-calorie light beer?

Alcohol advertisers market a lifestyle that is carefree and celebrates female friendship. It’s different from the ‘party hard’ vibes reflected by advertising targeted to men. Female-centric advertising is sophisticated, fun and aspirational.

There’s nothing fun or sophisticated about substance abuse. Full blown alcoholism may be a far cry from a few too many drinks on a Friday night, but it’s where the journey begins. While there are calls to place strict limits on alcohol advertising in South Africa, it’s unlikely to happen anytime soon. In the meantime, awareness is key.

Drinking can be enjoyable – but there’s way more to life than alcohol.