4 Things the Domino Effect Will Teach You about Life 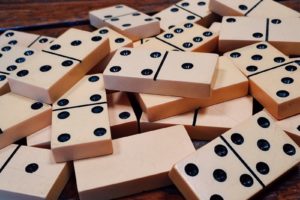 Whether you’ve played the classic Dominoes game or tried your luck at achieving that infamous ‘Domino effect’, you probably didn’t think much of it at the time. However, what you didn’t realise is that there are many lessons that dominoes can teach you about life. We examine 4 of these lessons below.

It’s Up to You

When playing ‘the Domino effect’, it’s up to you to place your own dominoes. It’s up to you to follow the process of trial and error. It’s up to you to learn from your mistakes and to keep trying until you get it right – or to give up and never get to experience the satisfaction that is watching that final domino toppling over! Pretty much just like life.

It’s Hardly Ever Set in Stone

While there are certainly many things in life that one cannot change, more often than not, if you’re willing to put in the effort, very little is actually set in stone. Just like the placement of your dominoes. If you think that it will make a positive difference, you can move as many of your dominoes around as you see fit. In short, life is a lot more flexible than you may think.

It doesn’t only matter where that final domino is placed – every single domino leading up to that last one is just as important. Similarly, in life when trying to reach a goal, every step towards it needs to be carefully planned and followed to allow for eventual success. If not, unless you happen to get lucky, you might not even reach that final step.

Even If You Don’t Succeed At First, There’s An Opportunity to Learn

That final domino might not fall over the first or even twentieth time that you kick-start the spiral process. However, each time that it doesn’t, you have the opportunity to learn from your mistakes and do things differently the next time. It’s that age-old saying… if at first you don’t succeed, try, try again. And again. And again. The more you learn, the greater your chances of getting things right with each subsequent attempt.

If ever you fail or things don’t work out as you planned, think of the dominoes… and keep moving forward. There’s always a chance to do things another way and possibly change the outcome. There’s always a reason to try again.